How are you guys? It is me Calista again!

Today, is my farewell day! T_T

Thank you very much for Auga Sensei for giving me this kind of fancy experience to be able to enjoy Crab Food! >_______< It was so so delicious! I really enjoyed the food!

I would like to say my gratitude for Auga Sensei who let me join studying about Kembu, and have experience performing Kembu. It was a great experience to me. As a Indonesian Representative, it is an honor for my self to be able to receive this kind of valuable knowledge about Japanese Traditional Culture! Thank you very much Auga Sensei! >___<

I also would like to say my gratitude for all Sensei, Eiki Sensei, Hisyo Sensei, Kyoka Sensei, Tomoda Sensei, Ryuu Sensei, Taro Sensei and Shiokawa san, for supporting me during my internship program for 2,5 months!

I will share my great experience about Kembu when I move back to Indonesia!

How are you? It is me again, Calista^^ 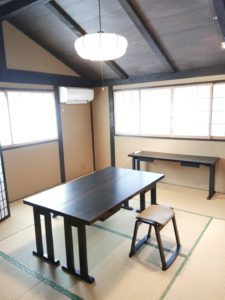 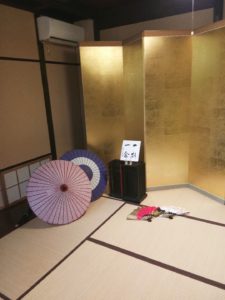 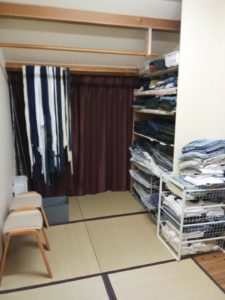 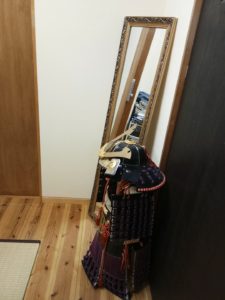 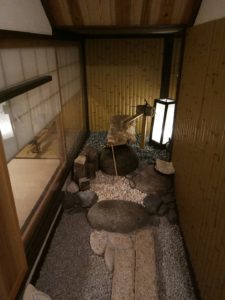 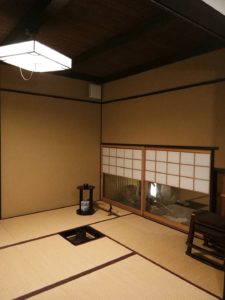 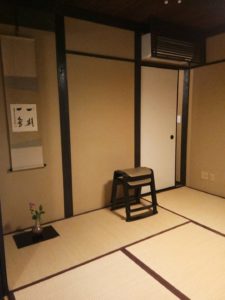 After visiting Kyomachiya, we rode bus to go to Waku Japan to enjoy tea ceremony held by Waku Japan. 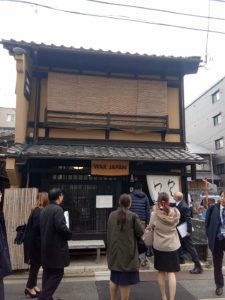 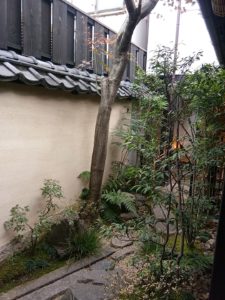 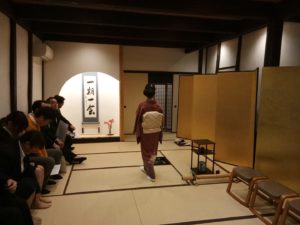 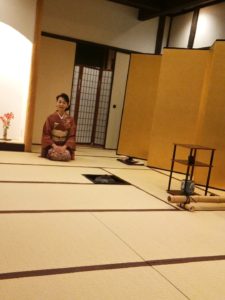 I was so happy to be able to experience this traditional Japanese tea. After enjoyed tea ceremony, we went to Matsuba Sushi in Osaka Prefecture.

Matsuba Sushi is a sushi restaurant that offers halal sushi. I recommend you to have a visit. The ingredients are non-alcohol and non-pork. This restaurant already received halal certification, so if you are only able to eat halal foods, this restaurant is good option!

I was so lucky to be able to taste this halal sushi. It’s tasty and fresh. Don’t worry about the price guys, the price is reasonable. More importantly, when I listened to the owner presentation, he mentioned member name of JKT 48 also tried enjoying their halal sushi! Hahaha (fyi, JKT 48 is a Indonesia girl band name) , wow! Totally Recommended guys!^___^

By riding Osaka Wonder Loop Bus, we went around to Osaka Castle, Shinsaibashi, Namba, and last destionation we stopped in Abeno Q’s Mall. Then, we took a look for some products coming from Shiga Prefecture. After that, we went back home.

That’s all about my activity story today. It was so fun!

How are you? It’s me again, Calista^^

I would like to share my activity today. Today is my last day to come helping in Yohoji Temple.
As usual I came here for helping Samurai Kembu Theater because customers using this temple for learning Kembu. I helped moving Samurai Kembu Theater’s equipments, putting samurai costumes, tidying up, and also moving the equipments back to the office. Our customers this time are coming from China. When Tomoda sensei gave explanation and training to them, there’s chinese interpreter who will translate Tomoda Sensei explanation.

I always forget taking pictures of this beautiful temple. Now, I have a chance to take some pictures.
Please kindly take a look guys. When you book our Samurai Kembu program, you may also book for this venue. ^^ This is little secrets about this temple’s rooms, here I show you ……. 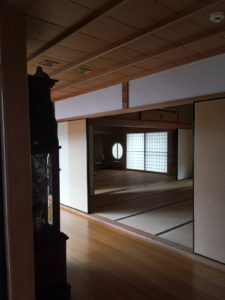 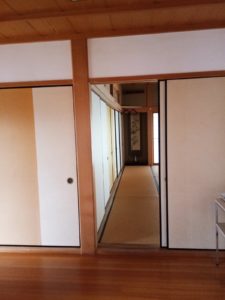 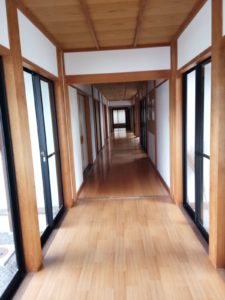 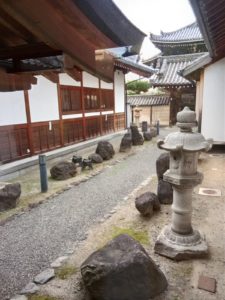 What I love so much for this temple is this beautiful Japanese style garden!!! It is so aesthetic! >,<

Finally, I could take pictures of this Yohoji Temple’s garden and could show it to you^^

I highly recommend you to have Kembu Lesson Class in Yohoji Temple! Are you interested to try?

I experience coming to Ritz Carlton Kyoto at the first time to help Samurai Kembu Theater because we have customers waiting there. We have 4 customers.

After finished helping in Ritz Carlton Hotel, I moved back to the office, and started working as usual.

That’s all for today activity.

I had my second performance, in Otsu City, Shiga Prefecture. Seriously, I was so worried that my performance today would like my previous performance. >,<

I arrived in Wani, Otsu City, Shiga Prefecture for my second performance around 10 am. My performance turn started at 1:30 pm. I played 47 Ronins again. I was so worried that it would be like my first performance >,<. Fortunately, it did not happen ^,^. Personally, I could do better this time, I didn’t fall down my tasuki hehehe. I felt so happy that my PIC from Pasona came from Tokyo to Shiga only for watching me!

Thank you for coming, Kaneko san >,<. I was so glad I did not perform badly.

I also met with Mr. Magari, Senior Master. I was so happy to be able to take a picture with him. And I also watched his kembu performance, and wow, that’s Awesome!!!

My performance could not be as good as today if I did not receive good training. Personally, I would like to say my gratitude for all of Samurai Kembu Theater’s sensei, Kyoka Sensei, Hisyo Sensei, Ryuu Sensei, especially to Auga Sensei, who supported me and gave me training and advice to be able to perform kembu well. Arigatou Gozaimashita >___<

After this event finished, we had Gathering with all performancers today! I did not know about this kind of gathering. And you know what, most of the participants are Kembu Master!!! WOW

That’s all about my activity story today.
Today was so tiring, but so fun!
Otsukaresama deshita!

How are you? It is me again, Calista!

I want to tell you about my activity today.

The meeting today is different room, but still in the same building. While attending the meeting, I could not understand the meeting contents to be honest, so I did another tasks while listening the meeting, such as searching Indonesian Travel agents, making activing reports, etc (already received permission from Auga Sensei).

After meeting finished, we played duel 1 on 1. It was so fun guys!

I also joined playing duel. Unfortunately, I could not upload the video here, my memory card was full at that time T,T”

This duel was so fun, but unfortunately there’s accident happened with one of our member, so we had to stop the duel activity. Get well soon Sensei >,<

That’s all about my activity today! Keep reading guys!

How are you ? It is me again, Calista.

I could not understand whole contents of this meeting, so I decided to do another tasks while listening the meeting, such as contacting travel agents, making activity reports, etc. (I already received permission from Auga Sensei, obviously).

After had lunch, Hisyo Sensei showed Seiza, Iai Hiza, and Tachi Iai demonstration. He also gave us training about Kembu movements to me and others.

After demonstration and Kembu Training given by Hisyo sensei finished, we prepared to go to ANA Crown Plaza for playing Tousenkyo (Japanese Traditional Folding Fan-Tossing Game). It seemed so fun!

For playing Tousenkyo is easy but difficult to be honest. We have to toss the folding fan in order to hit the red abject. After that, we check the results of our tossing in Tousenkyo Scores Paper. In my opinion, more unique the results, we can achieve higher scores^^ hehehe. All members of Samurai Kembu Theater joined this Tousenkyo game!

I also didn’t want to lose with sensei, so I needed to be able to play this Tousenkyo Game!

Tousenkyo instructors gave us chance to practice first. After practice has been finished, they will start Tousenkyo Battle! ^^

How are you? It’s me Calista again.

I went helping Samurai Kembu Theater’s team in Yohoji Temple. Hehehe
Same like previously, I went helping other staffs to bring the Lesson Class’s equipments, put on costumes to the customer, and tidy up.

We received many customers today. They were so enthusiast learning kembu.
In our lesson program, all of the customers will receive certificates after finished practicing.

After finished helping Samurai Kembu Theater’s activity in the temple, Auga Sensei invited me to join her and another sensei to go to Shiga Junior College Attached Senior High School.

They did a Kembu’s Workshop for the students of that school. I think this is good activity for introducing kembu to Japanese young generations in order to make them know better about their own culture.

I came to watch Samurai Kembu’s Performances. It is a good experience too to be able to visit Japanese school.

That’s all about my today’s activity today.

See you again next time for my next activity! ^^

How are you? It is me Calista again ^^

Today is my first performance!!! OMG!
After weeks learning, finaly this day come! To be honest, I felt so nervous!

I will perform Kembu, titled 47 Ronins! Btw, do you know 47 Ronins?
47 Ronins is a well-known sad history among Japanese people.

Ronins means samurai who has no lord. These 47 Ronin’s lord died because of seppuku punishment. Seppuku means suicide. This sad history all begins because their lord, named Lord Asano, assaulted Kira Yoshitaka (Court Official) who has no weapon. Assaulting someone who has no weapon is a crime. At the same day, Tokugawa Tsuneyoshi punished Lord Asano to do seppuku. But, Kira Yoshitaka did not receive punishment at all, which is so unfair. 47 Ronins who does not receive this unfair condition for their lord, sacrifice themselves in order to take revenge in order to show their loyalty to their Lord.

Back to my performance story. This time, my performance as sad as its story T.T. I tried my best, but unfortunately I unaccidentally didn’t tie my tasuki (white rope) correctly. So, it fell down T,T

Auga Sensei and another sensei supported me. I will improve my performance better on next performance.

That’s all for my activity today. I promise to myself that I will do better performance next time.

See you next time guys !

Our customers came late this time. To be honest, it made us difficult to deal with the time because the place does not belong to us.

After waiting for an hour, finally our customers came. Samurai Kembu Theater’s team helped each other to start the lesson quickly.

I helped to put on customes to the customers and tidy up too.

By the way, our customers enjoyed the lesson class. In my opinion, the venue place is good, but unfortunately too hot since customer who came today are so many.
Thank you for coming all.^^

That’s all for my today’s activity.

See you again next time! ^^